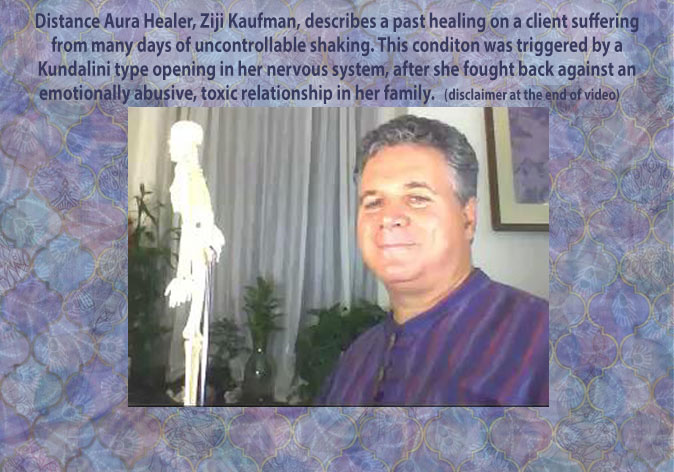 Distance Aura Healer, Ziji Kaufman, describes a past healing on a client suffering from many days of uncontrollable shaking. This condition was triggered by a Kundalini type opening in her nervous system, after she fought back against an emotionally abusive, toxic relationship in her family.

A Distance Aura Healing client of mine went back to her parent’s home for a holiday visit, and she came back complaining of uncontrollable, involuntary shaking that has thus far lasted four days.

She hasn’t been able to sleep well during these four days, having nightmares, as well as frequent headaches, nervousness, and general fearfulness.

I had known about her abusive father because I had seen that abuse in her aura many times in past healings.

Indeed, I felt she had a curvature of the spine, where her shoulders would hunch over, creating a very poor posture, from years of being constantly berated and put down, by her abusive father. Many times in past healings, I ‘heard’ her father’s voice screaming from traumatized layers of my client’s aura, phrases like "You're not good enough", 'Why didn't you do such and such thing", "You didn't clean up", "You don't care", etcetera. Whatever he could think of to make her feel inferior.

It's like if you whip a horse, for example, eventually the horse is just going to hang its head, turn the other way, and become meek and sheepish. All the rebellion gets beaten out of it. Thus, my client’s slouching spine comes from a similar verbal ‘whipping’ over many years.

So when I started the remote aura healing, I basically saw the whole verbal abuse episode that occurred at this holiday family gathering four days ago. The father-daughter relationship seemed to be on the verge of exploding from the very beginning, and indeed, this time, the big blow-up happened, and my client finally stood up to her father.

To understand this new ability of my client to stand up to her father, I can explain it by saying that we've been doing a lot of distance healing work over the months, giving her more power and confidence. And she got in touch with her intense anger at her father.

It's amazing, what can happen when you live away from home and work with a remote healer like myself. You often get a new sense of your dignity, self-worth,  competence,  intelligence, etc.

All of a sudden you may start seeing that the world begins treating you differently, and now when you go back to your family home, you’re like, "Don't talk to me like that", "I'm not the little girl, who used to live here", “Speak to me with respect!”, etc.

And so when her father started berating her this time, all of a sudden, out of nowhere, an explosive energy shot up from the base of her spine, similar perhaps to what an unintended Kundalini Energy Awakening, or an unintended Spiritual or Psychic ‘Opening / Awakening’ is like as has been described in accounts of people who’ve had these ‘Spiritual Emergencies’.

My client’s Body Wisdom gave me an image to describe this spinal explosion. It showed me the metaphor of the carnival game, where you take the big rubber hammer-mallet, and you hit it on the lever, hoping to make the puck go all the way up to the top to hit the bell?

That's how it looked in my client’s aura.  This explosive energy went all the way up her spine, her spine completely straightening and bridled up from its typical slouching posture.  She just stood upright and defended herself like a warrior, reclaiming her self-esteem and

self-respect, at least in this one father-daughter, relationship-changing moment.

I then got another image from her Body Wisdom, where each vertebra in the upper back, became like a battleship cannon, firing psychic cannon balls, both from her tongue, as well as energetically.

Each psychic cannon ball that was fired out from her vertebra and tongue, was telepathically screaming phrases like  "Don't treat me like that, I'm not I'm not a little girl anymore", and "You can't talk to me like that"!

And amazingly, from what I could see from her aura, her father backed down! He got very sheepish and meek. He was shocked, got quiet, and walked out of the room.

But shortly after my client’s ‘Victory’, having tasted some long-awaited moments of satisfaction, she started shaking uncontrollably. And, as mentioned, it's been going on for four days now.

The concept here is that there is a ‘ceiling’, a ‘barrier’, a ‘limit’  to how much our auric nervous system, auric body layers, and chakras can handle, which is defined by the physical and emotional traumas we’ve had in this and past lives.

There are limitations or ‘ceilings’ on our capacities to feel emotionally. Every person will have a different ‘ceiling’ based on things like past heartbreaks, or verbal, emotional, or psychic abuse we have experienced in this and past lives.

Likewise, there are physical ‘ceilings’ that are different for each person, with things like endurance when running or muscle elasticity while stretching, or the strength of our bones to withstand injuries to our skeletal frame.

So, in a situation like the one we’ve been describing, my client had a volcanic explosion that just went completely beyond the physical and emotional limitations of her nervous system, her auric body layers, and her chakras.

There's a concept called ‘recoil’, when you go past your body's protective boundaries or energetic ‘ceilings’.  Just like when you shoot a rifle, you go backward. That's recoil.

Well, when my client fired psychic cannon balls, her nervous system, energy field, the 7  layers of the aura, and the 7 primary chakras, particularly the throat chakra,  the 5th chakra of the seven main chakras, and the root chakra, the 1st chakra of the 7  energy chakras, completely recoiled, causing this uncontrollable shaking and trembling which has lasted four days now.

This physical and emotional recoil phenomenon happens to all of us in varying circumstances,, where we go past our body's limitations, causing our body’s to ‘flip out’ so to speak.

Some people may pass out, ‘see stars’, collapse, become disoriented, experience vertigo, etc., during these moments of recoil.

In terms of her chakras, she was having a massive breakthrough in her throat chakra, the blue chakra of the 7 main chakras, by finally speaking her mind to her father.  Also, by finally putting her foot down and standing  In her power, she had a huge root chakra breakthrough as well,  the red chakra of the seven primary chakras, Thus, a lot of chakra healing

needs to happen following these kinds of energetic emotional and physical ‘explosions’.

So basically in this healing, I was able to see all the different vibrations going on in her shaking and trembling, and I think I remember my psychic hands becoming like five hundred fingers, touching each one of those shaking and trembling vibrations, and holding them, getting in touch with where each vibration was coming from.

Then slowly my psychic fingers started ‘talking’ to the vibrations, gradually slowing down the uncontrollable shaking, as well as diffusing the trauma of the whole encounter with her father.

Anyway, this is just an example of what happens in a situation when you break out of your normal energetic boundaries and go to a new energetic level, possibly having a major positive opening or breakthrough in your physical and/or emotional health.

But, as this healing shows, there are ramifications for these kinds of breakthroughs. Recoils that can really through your physical and emotional health for a loop.

Thankfully, in this case, with the help of this kind of healing work, my client’s recoil was diffused and now she can celebrate having stood up to her bullying abusive father, hopefully forging a new, permanent, and healthy relationship with him going forward.