*Note:  Some of what's below is only partially complete. I am constantly updating these sections, so please check back periodically for these updates!   Peace...Ziji

Removing "Entities" during the Aura Cleansing

-I do NOT remove curses or go to battle against harassing/possessing evil spirits.

I can definitely remove spirit attachments if your body intelligence gives me permission and the attachments are not locked into the aura by a curse, by a possessing spirit, or by a karmic debt.

I "might" be able to give you some information during a regular healing session regarding whether a curse has been placed on you or not, and if so, who is behind it and why it has been done. No guarantees.

I also "might" be able to give you some information during a regular healing session as to whether or not, you are being harassed by an evil spirit, and if so, perhaps who and why they are harassing you. Again, no guarantees.

-My specialty is removing / clearing "spirit entities", which are energy beings that have never incarnated as human beings,
although they do have rudimentary consciousness. Below, I describe this "spirit entity" phenomenon in more detail).

Removing "Entities" during the Aura Clearing

The difference between negative 'energies' and negative or 'entities' is that an entity has consciousness.

It is a 'spirit being', like we humans too are spirit beings housed in a physical vessel called the body.

There are a variety of 'entities' that we can pick up in our day to day interactions, most of them are extremely small, often microscopic, and relatively benign.

Having an entity attach itself to you aura is never a good thing, but most entities are not evil and will primarily try to 'seek shelter' inside your body to get 'out of the cold' and into our 98 degree body environment, where there is a food supply steadily arriving via blood cells, as well as a relatively quiet place to 'go to sleep'.

The main factor as to whether an entity will be able to penetrate deep into your body, or hover outside your body at varying distances, is whether there is some kind of 'symbiotic or sympathetic emotional attraction which either magnetically pulls an entity closer to you or keeps them at a distance, hovering loosely around your aura.

It's these latter, loosely connected entities, that are easy for me to clear from your aura during the beginning part of a healing session.

The entities that have a strong symbiotic / sympathetic magnetism to you, will get pulled in deeper into your aura, and will typically require additional guided healing techniques to remove.

These deeper entities typically get into our bodies through physical and emotional traumas that create ‘holes, tears, or leaks' in a person’s aura that Astral Entities or Spirit Beings can enter into and ‘live’ in, feeding off of your energy like parasites.

As mentioned, most of these entities are extremely small and relatively benign, although they do clog up the smooth functioning of your aura and body, and siphon off a small portion of your energy, but they're not an immediate threat to your health. 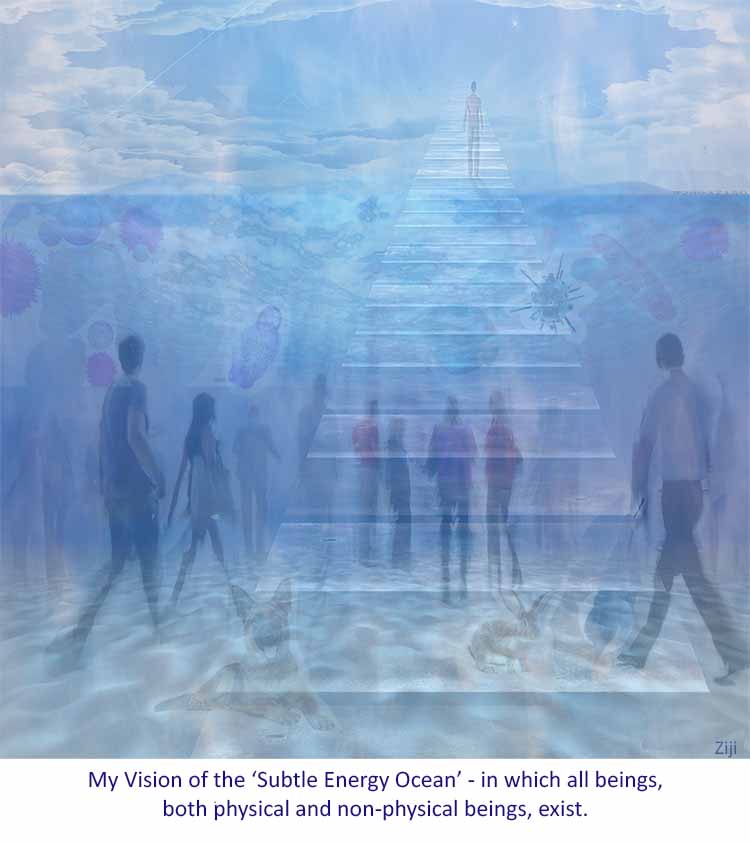 As I depict in the image above, I view the spirit plane as existing within the same vast subtle energy ‘Ocean’ that we living physical beings exist
in.

Most are extremely small and relatively benign. ALL of which I am capable of removing from your aura.

There can, for example, be deceased human beings who you had some relationship to when they were alive, and now they decide to stick around your aura while they're on the 'other side' and you're still alive.

They could be relationships from past lives, that for one reason or another, needed some closure due to some unresolved aspect to your relationship while on earth together.

For sure, some of these deceased humans may be 'loved ones', like your parents or relatives.

In these cases, while it's still usually unhealthy for a beloved deceased relative to be 'hanging around' you for extended periods of time once they've passed on, these 'beloved Spirit Visitations' are usually benign, and may even be uplifting and inspirational at times.

Most people cant perceive these more beloved 'Spirit Visitations' , although more people than will readily admit, do occasionally 'sense' the presence of their deceased relatives.

I, of course, can see (clairvoyance), hear (clairaudience) and feel (clairsentience), these spirit entities when they show up during a healing and I am guided to pay attention to them for some reason.

Many people might 'see' a beloved deceased relative in vivid dreams, or hear subtle voices or mysterious 'touches' reminding them of this relative.

More rarely, some Astral Entities or Spirit Beings can be more destructive and be a major cause of your health issue(s).

For these more powerful forces, considerably more healing work is typically needed to remove them from your aura.

One major source of these more destructive entities, is Alcohol.

There is a reason that Alcohol is called 'Spirits'. Not all alcoholic beverages will cause destructive 'Spirits' to attach themselves to your energy body, but many will.

Each beverage type as well as the individual brand and time of fermentation, will produce 'Spirits' that have varying degrees of destructive capabilities.

Another source of picking up these destructive entities would be anyone who's either been in or worked in a prison, or a psychiatric hospital.

These types of institutions house people with varying psychosis, which will attract, and may themselves produce destructive and dangerous spirit entities,

Any of these types of entities can be removed during my healing sessions, so long as I am guided to remove them by the client's Body Wisdom.

While ALL spirit entities should be removed from the aura if possible, often times they are filling or plugging up some leak, tear, or hole in the person's aura created by some traumatic experience that happened to the client in the past.

The client's Body Wisdom has to be ready to heal that leak, tear, or hole immediately once that entity is removed, or else the Body Wisdom might decide it's better to leave the entity where it is for now, until a healer, like myself for example, comes along that can do this type of entity removal.