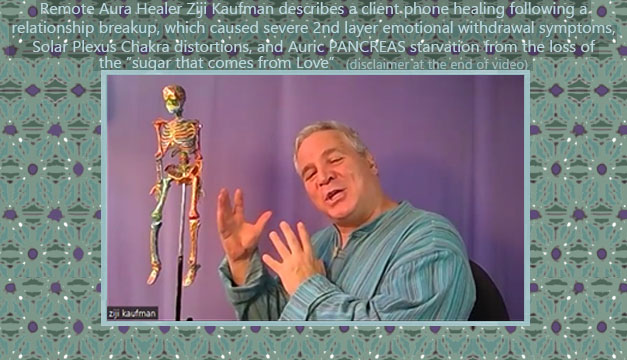 caused the 2nd layer of the 7 layers of the aura (the Emotional Body) to have withdrawal symptoms, the 3rd of the 7 primary chakras, the Solar Plexus Chakra, to have distortions, and Auric PANCREAS starvation from the loss of the ”sugar that comes from Love”.

This is an aura healing that I did on a man in his 20s, who had recently ended a multi-year

relationship with a woman. It's been a few weeks now since the relationship breakup, and after feeling

pretty good for a few weeks, all of a sudden, now, he was feeling very emotional, fatigued, and crying a bit.

As a healer of the aura, it was apparent to me that he was experiencing withdrawal

from the relationship. Particularly if the other person's energy is something that stabilizes you,

grounds you, and completes you.

In auric terms, it involves holes and leaks in a person’s aura that keep them from feeling stable

And so, when you meet a partner where there's something about their energy or

consciousness and their personality, the chemistry or electrical magnetism between you

two pulls you together.

So let’s go deeper into the auric dimensions of this particular healing.

What I'm going to describe here is pretty common in breakups, although there are many other

dimensions of relationship breakups that don’t really apply to my particular client’s situation, like

auric / energy cords connecting them (not relevant for this client), and financial- legal

entanglements, to name only a few.

But this breakup wasn't all that complicated.

They were just pulling apart. There was also a move that put distance between them.  Basically,

it didn't look like it was going to have a future.

So I went into my client’s aura, and almost immediately I saw that the

second layer, the emotional body of the seven layers of the aura, was surrounded by this really beautiful

energy. Completely filled up with this beautiful energy.

His body is screaming. The cells of his aura were crying.

In particular, I was guided by his Body’s Wisdom to focus on the front solar plexus chakra

blocks, the 3rd chakra among the 7 main chakras,  and also the liver and pancreas area in particular.

From my vantage point, in addition to the physiological function of the pancreas, as the

regulator of insulin, handling the regulation of the body’s “sugar”, the pancreas also has an

emotional purpose, as do other internal organs as well.

Western medicine/science will likely scoff at this assertion, particularly by a remote Aura Healer

like myself, but after doing thousands of distance Aura Healings, as well as mapping out what I

30+ years, I feel justified in making this claim.

modalities for pancreas healing, or natural healing methods for healing the pancreas, which

obviously relates to anyone looking for alternative or natural methods to healing diabetes.

aura are always increasing, and it is always possible for me to, in hindsight, change or augment

my ideas about any previous belief I’ve had.

But currently, my belief regarding the emotional dimension of the pancreas, is that it is intimately

related to how much love, ‘sugar’ or ‘sweets’ we are getting, to use some common vernacular

expressions. Therefore, in my view, it follows that when we're not getting that love, or those

‘sweet’, ‘sugar’ energies anymore, the pancreas starts to freak out, and to extend my auric

But back to this healing…

My client’s pancreas was brought into my auric vision, guided by his Body’s Wisdom.

light, drops or droplets, coming from my auric hand to his pancreas. Beautiful green

lime green drops of light energy, which quickly calmed the whole area down.

And then I went into the beautiful emotional body energy and gradually, gradually

drained it, inviting it into my aura so I could dissolve it, with the hope of putting my client

back in his own auric body, on his own energy, the way he was before he met this

beautiful energy, is causing my client continued suffering. It's making him really tired,

The healing was a long process. I had to stay with this process for a really long time, finally

putting him back on his own energy.

Following this work on the second subtle body of the aura, I was guided to move up to higher

layers of the aura. going first out to the mental body, the third layer of the 7 aura layers,

to deal with some of the mental layer dimensions of the breakup.

And then I went out to the fourth layer of the 7 layers of the human aura, which I call it the ‘people layer’, where

we store our interactions with people. And that's where a lot of her energy was still

energetically ‘hanging around’, so to speak. Spirit entities were hanging out there from her

as well. Also just a lot of memories of her.  So I had to stay there quite a while and begin to

dissolve that energy as well.

Also went out finally to the 5th layer of the 7 layers of the auric field, which I call the blueprint, the template level

for this particular incarnation.

The sixth layer of the aura and the seventh auric layer in my experience, are who we are before and after this lifetime.

From the fifth layer down to the first layer, is from my vantage point, everything dealing with this lifetime.

So anyway, I was guided to do this remote chakra healing on the 3rd primary chakra area, his solar plexus chakra, as

well as the pancreas and liver area, by putting my auric hand there to calm these areas down.

So this was really good, you know ultimately, putting him back on his own

energy. Calming the pancreas down, the liver area, and the whole solar plexus chakra area.

The solar plexus, I believe is really important in our connection with people.

My client had a nice connection with this woman, and then all of a sudden that

connection is cut off, and thus I had to do this complicated distance chakra healing on this

From my vantage point, the middle of the solar plexus chakra pretty much goes straight through

So when we have a good connection with people, we're giving and receiving that love,

the ‘sweetness’, the ‘sugar’, that makes us smile. And keeps the pancreas happy and

functioning as it was meant to function.