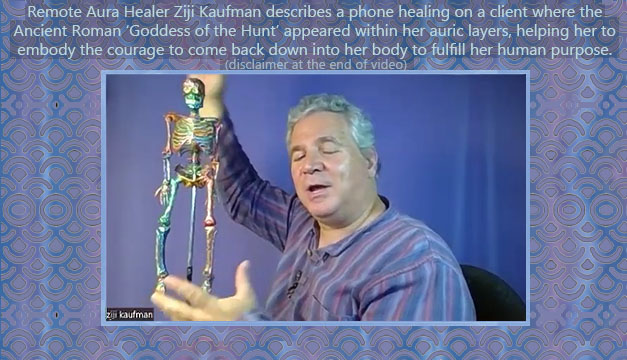 Distance Aura Healer Ziji Kaufman describes a phone healing on a client where the Ancient Roman / Greek 'Goddess of the Hunt' appeared within her auric layers, helping her to embody the courage to come back down into her body to fulfill her human purpose.

When tuning into this 50-year-old woman’s aura for a remote aura healing, I immediately saw that she had some serious auric distortions, in particular auric grounding issues. Her auric feet were about two feet above her physical feet. It looked like she was levitating aurically, completely ungrounded energetically.

What was a bit different about this particular woman’s auric body distortion, was that her

physical head and brain.  So she kind of looked like a midget aurically, even though physically

she was actually a relatively tall person.

Gradually, I started to realize that what was keeping my client from becoming grounded in her auric feet, coming down the two feet into her physical legs and feet, was an issue of courage.

She had been hiding from the world, isolated, feeling invisible, not feeling like she had any purpose or reason to stick around this planet.

Indeed, she expressed, as a number of my clients have over the years, that she just didn't want to be here on Earth anymore.

Like many of these other past clients who’ve expressed a similar sentiment, she is a very

spiritual person, having studied many metaphysical paths, been in the presence of many gurus over the years, does yoga, is a long-term meditator, etc.

She is also very depressed about the state of the world in terms of politics and the environmental crisis, among many pressing global issues.

Nonetheless, it was clear to me that she was brought to me to help her to have the ‘courage’ to

come back to the world, heal herself, work to figure out why she incarnated into this lifetime, and hopefully discover what her higher spiritual purpose was here on Earth.

It was obvious to me from the start, that we had to get the aura distortions of her auric legs and feet back down into her physical legs and feet, and that now I understood that I needed to help her have the courage to do this:  the courage to come down to Earth, to stand in her power, and to hopefully make a difference on Earth for the remainder of her lifetime.

At this point in the healing, I had an incredible vision.

All of a sudden, my client’s aura became 100 feet tall. First I saw giant leather sandals with straps that tied up the ankle and shin. Then following up this 100-foot-tall body, I saw

that she had a bow and arrow strapped around her back. To me, based on my past experiences, it seemed like my client had some past layer of her aura that either was, or was intimately connected to, an ancient goddess.

Somehow this ancient goddess felt Roman (or Greek). So I looked up the goddess in the Roman pantheon who was the ‘Huntress’, depicted typically with a bow and arrow.

the Goddess Diana or the Goddess Artemis,  was that the Goddess seemed to have some disdain for all the tiny humans 100 feet below who were Her devotees. She seemed to feel that these worshipers

of Hers were whiney and needy, and even though they prayed at Her temples and sacrificed animals to Her, She often felt derision towards them. She preferred to hang out on the god-goddess spirit plane pantheon with Her peers, like perhaps, Dionysius and Bacchus,

She was, however, guarding the Mount Olympus realms for spirits who She deemed destructive to the god-goddess realms. She was the Goddess of the Hunt, using Her spirit bow and arrow

to defend the higher energy realms of the Universe from lower spirit beings who would deface and darken the heavens.

Basically, She guarded the whole 6th layer of the 7 layers of the aura, which contained a number of gradations

All this said, Diana-Artemis was always aware of the little, tiny Earthlings praying continuously at Her temples on Earth, with all their ailments and worries. So periodically, the Goddess would focus exclusively on Her Earthling devotees, spending days listening to their concerns and

doing Her best to help them in their lives.

When She was paying attention to Humanity, I saw angel wings begin to grow, and She moved from the upper astral upward just into the heavenly 7th layer of the aura, Now entering the realms of the ascended masters and the angels and archangels. Clearly, She had opened Her heart and compassion to do this service for Her tiny Earthling devotees.

At this point in the remote healing, the focus came back to my client in human form in this life. But now

we were able to bring down the powerful, fearless energies of the Goddess Diana-Artemis into her human consciousness, working to reprogram her current identity.

And with this reprogramming, we were able to bring her spirit body down those 2 feet, so

now she could feel more powerful, standing strong, grounded, and transforming all those

In terms of the chakras, she was now grounding more powerfully in her Root Chakra, the 1st of the 7 primary chakras. Similarly, she no doubt also had a powerful connection to her Crown Chakra, the 7th of the seven main chakras, since she connected so strongly
with this Goddess.

More importantly, my client now could receive her ‘mission’ to serve Humanity, being able

to have the courage necessary to come out of her shell, and fulfill her divine purpose for

this lifetime, even if this purpose is still unclear at this point.