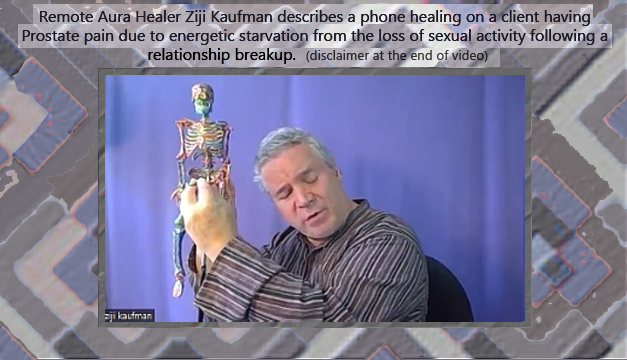 (click on following link to watch video if video is delayed)

Remote Aura Healer Ziji Kaufman describes a phone healing on a client having Prostate pain due to energetic starvation from the loss of sexual activity following a relationship breakup.

This video is about a remote aura healing on a Professional photographer in his 40s.

From what I know about him, he's really in demand. Families love him because he's got so

much positive energy, he's very upbeat, and has a million-dollar smile.

But he sought out my distance aura healing work, complaining about intense pain in the

prostate area on the left side. As far as I know about my client’s medical history, he had no

previous diagnosed prostate-related conditions, like prostatitis, enlargement of the prostate, or

prostate cancer. Nonetheless, this prostate pain was a clear expression of the Auric Lymphatic System.

What I do know about my client's life, is that several months ago his heart was broken

when he knew he had to end a relationship.

I know that he was enjoying the sex life with this woman. So he's been going without sexual

activity for quite some months now, feeling sexually frustrated, having to suppress his

So being celibate for many months, I got a sense when he said his prostate was hurting,

that he was going through Sexual Energy starvation. This forced celibacy was also affecting his

So as soon as I tuned into his energy body, I saw that his whole left side was pretty much in line

with the heart and the spleen, continuing down to the auric prostate.

I also felt like I was seeing what I think is called the seminal vesicle, as well as the

left testicle. I felt like I could see how tight and tense the prostate was, and also the tightness in

the left testicle. Clearly his Auric Reproductive System was suffering on the left side causing his Reproductive Issues.

-the Root Chakra (the 1st of the 7 primary chakras) which is usually connected to the Auric Reproductive System, and specifically the prostate in this case;

-the Sacral Chakra (the second of the seven primary chakras), which is commonly acknowledged to be connected to sexual pleasure/blockages;

-the Solar Plexus Chakra (the 3rd of the 7 main chakras), which is connected to the Auric Spleen functionality in my opinion;

-the Heart Chakra (the fourth of the seven main chakras), which in this distance energy healing the heart is being protected by the auric spleen.

I should also mention the significance of aura clearings and aura cleansings in the 1st and 2nd layers of the Aura in both the physical and emotional aspects of my client’s energetic symptoms.

What’s more traumatic, from an auric vantage point, was that the whole auric left side

was moving away from the right side of the body, his Spirit Body being detached to the left,

This aurically smaller, detached to the left, shriveled-up body, was like one-eighth of his total

auric body, where the rest of the auric body on the right looked healthy being continually

engaged with being the great photographer that kids and families loved so much.

The problem was, he couldn't stop working, the healthy right side of his auric

body was keeping his high-energy photography business afloat, while the sexually starved,

detached, shriveled-up auric body on the left continued to suffer.

The left side reminded me of Robinson Crusoe: stranded on its own isolated island, detached

from the (right side) mainland.

The right side of the body seemed to be saying to the detached, suffering left side,

"Look, I can't deal with you right now. I know you're suffering but I just can't pay

attention to now, with so much photography work coming in".

In terms of working to remotely heal this situation, I knew that I had to give enough remote energy

healing to the detached, shriveled-up left side to bring it back energetically, because it was

energetically to the right, because remember it was smaller than the right side and dried up like

So that's what I was guided to do.

One interesting dimension, was that I had to do a lot of healing work not only with the

auric prostate, but also with the auric spleen, because there was this direct line going up the left

side from the prostate which went through the spleen directly to the auric heart, which months ago,

As with my client’s prostate history, as far as I know, he did not have any medically

diagnosed spleen-related conditions like Splenomegaly (Enlargement of the Spleen), or any

history of Spleen infection or injury.

As an aside, the spleen from my vantage point is a defender of the heart. It's like the first

line of defense to protect the heart emotionally. Of course, the spleen has its anatomic and

purposes. In this case from my vantage point, the spleen has this extremely important emotional

function as the first line of defense protecting the heart.

So for example, if somebody is having a relationship breakup, or somebody you love is deftly ill,

the spleen will come in right away to guard the heart, because you don't want the heart skipping

a beat, fluctuating, or even worse, having a heart attack.

So the spleen takes the brunt of the emotional impact first, and then if it's safe enough,

it will finally let the energies of the emotions get up to the heart, starting communication,

trying to resolve the emotions about whatever the heartache is.

So, in this distance healing, I slowly gave energy to the left side, stretching it out from its

consciousness, and waking it up so it can rejoin the (right side) mainland!

As I was doing this, there was an interesting phenomenon happening with the auric blood

energy in the auric spleen as well as the whole auric Circulatory System. The auric blood

energy went from a sort of depressed, darkish blood cell energy, to all of a sudden transforming

Anyway, the right side of the body seemed to be saying to the left side, "Now you can join us."

And the left side seemed to be cheering, "I'm Back" to the right side!

It was really nice, because at the end of this remote healing I saw my client as more complete.

Probably about 80 percent back to his regular state of health, largely returning to his normal

right-left balanced auric body, with the left side stretching out and becoming its normal size,

and reattaching itself back to the right side.

So once again, I saw him snappin' photos, cheering on the kids, getting them to smile,

and giving his customers all of his great, positive energy.

And now I didn't see any traces of the detached left side, or his tight, energetically suffering

I saw his full, healthy consciousness come back, fully embodying the great photographer that he