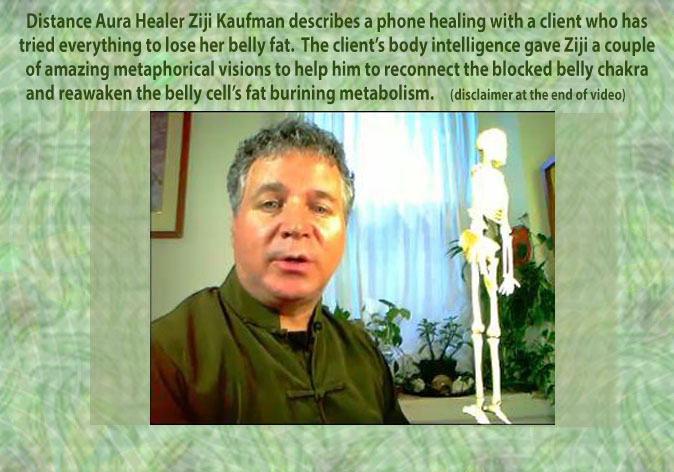 Distance Aura Healer Ziji Kaufman describes a phone healing with a client who has tried everything to lose her belly fat. The client’s body intelligence gave Ziji a couple of amazing metaphorical visions to help him to reconnect the blocked Sacral (Belly) Chakra, the 2nd of the 7 primary Chakras, and reawaken the belly cell’s fat burning metabolism.

This video describes a remote aura healing I did on a client of mine, who had long sought to lose belly fat.

Her diet was very healthy, eating a low carbohydrate and high protein diet. She did a lot of exercises, like dancing, running, and yoga. But despite all her best efforts, she couldn’t lose the weight.

I should say, based on the photos she sent, that she wasn’t massively overweight or obese.

She mentioned that her body mass index or BMI, was definitely above where it should be for her height. Clearly, her cell metabolism was not burning the calories she needed for the

The first thing I saw when I tuned in for the distance aura healing, were Sacral Chakra healing issues (the 2nd of the seven primary Chakras), that needed addressing.

Now if you read the literature on the chakras (chakra healing, chakra clearing,

chakra cleansing, chakra colors, etc.), you will mostly read about the 7 ‘primary’ chakras.

But the chakra literature usually doesn't mention the back chakras. So instead of their

being only 7 primary chakras, there are actually 12 when you count the BACK of the sacral / solar plexus / heart / throat/ and third eye chakras.

Indeed, to complicate this even more, with 7 layers of the aura, and 12 chakras on each layer,

you actually have 84 chakras in the human aura.

Let me emphasize again that the Crown chakra (the indigo chakra or violet chakra) and the Root chakra (the red chakra) are one chakra,

stretched out the length of the body in what I refer to as the central chakra channel.

It connects the Crown Chakra (the Sahasrara Chakra) and the Root Chakra ( Muladhara Chakra), or more metaphysically speaking, it connects Heaven and Earth!

And importantly, for optimal auric health, the  front and back chakras

should meet in the middle and intersect this central chakra line.

Anyway, let me describe the really fascinating dimensions of this particular aura healing and chakra healing.

So, what I found when I tuned in for this distance healing, was that there was a lot of energy

from the third subtle body layer of the aura going outwards, towards the fourth, fifth, sixth

The same thing with the chakras.

There was a lot of energy from the third chakra (front and back) going outward, including the fourth, fifth, sixth, and seventh layer chakras (again, front and back).

The problem was INSIDE the 3rd layer: the first and second layers. In these innermost layers,

there was nothing going on. It was all blocked. It was like a no man's land.

So this explained quite a lot, because if there's no energy, getting through to the innermost layers and chakras of the aura (the 1st and 2nd) second, then no energy is getting in there.

There's no intelligence getting through!

Basically, the cells are left on their own, having long ago forgotten that they were belly cells, thus creating random molecular clumps of cells, which translates to abdominal fat (in slang terms: ‘blubber’) as well as high cholesterol clogging up the healthy functioning of the digestive tract.

Now, the other thing that I saw as well, was that the central chakra line was pretty good until it got to the lower back and belly region, which was also a no man's land.

The energy was just not getting down from the brain down through the spine,

and thus nervous system communications weren't able to pass through this sacral-belly chakra (the svadhisthana chakra) blockage.  So those cells inside the belly were pretty much abandoned and at this point, the body wisdom of my client started revealing the 'Why'.

also inside this central chakra line connecting the crown to the root?

At this point, the body wisdom showed me some really interesting visions.

The first vision it showed me was an image of miners being trapped down a mine shaft.

So the brain, on the top of the mine shaft, is yelling down, "How are you guys

doing down there? Don't worry, we're working non-stop to get down there to rescue you."

And, you could also look at it from the belly / sacral chakra horizontal (front to back) vantage

point as well, because like the collapsed vertical mine shaft, the horizontal way to dig out the miner-belly cells, had also collapsed.

So the key to this remote healing was to clear out this belly / sacral chakra / auric intestine / auric lower back region of stuck energy.

To unblock this area, I was guided to work on both physical as well as emotional levels.

Physically, her lower spine, including the sacral bone and the lower lumbar vertebrae, had been traumatized from overworking at her job over many years, working really hard,

and not getting enough oxygen, enough blood, and enough energy to the lower spine.

So it started giving out, creating some significant lower back pain.

Emotionally speaking, as it relates to weight loss efforts, I was guided to dissolve the auric energy blocks in the front belly energy caused by different health crises and difficult family dynamics.

to connect the back and the front of the sacral chakras. spinning together. And by the end of the energy healing, the connection had been made.

I was also able to increase the energy stream flowing up and down the central chakra channel,

getting it to be more straight and flowing.

That's what you're looking for: the middle of the chakras to hook up with the central chakra line,

connecting the crown to the root.

So, in this particular healing, we definitely made a good hook-up, and the cells were now getting some improved communication from the brain down to the legs.

And most importantly, we were able to finally get to the abandoned miners and bring them up to safety, reminding them that they are belly cells.

Now the correct blueprint information is getting to the belly, and therefore the cells over time should finally start working correctly.

Hopefully, for my client’s weight loss goals, the fat should start to gradually come off.