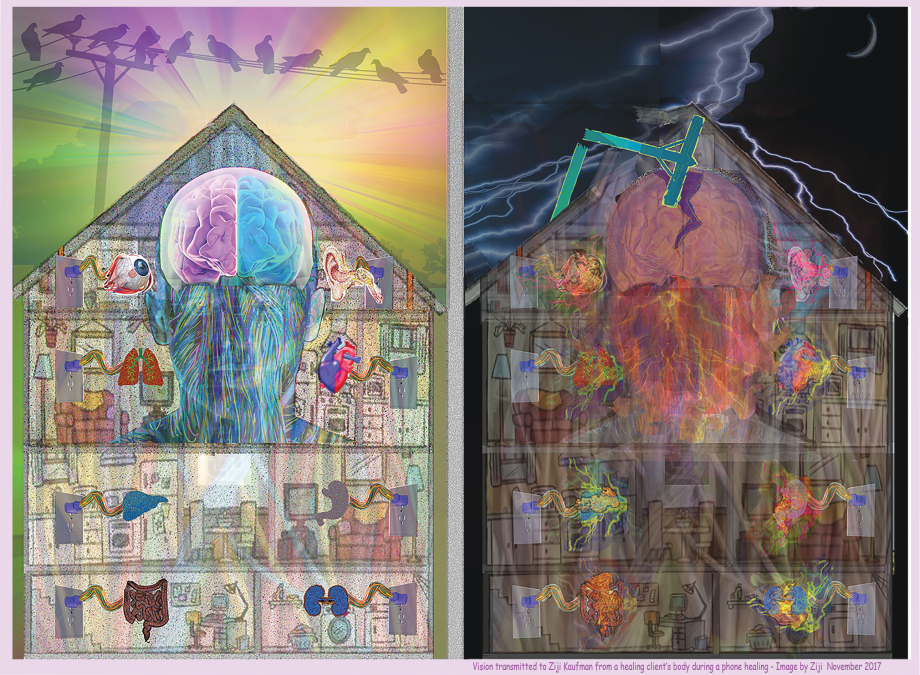 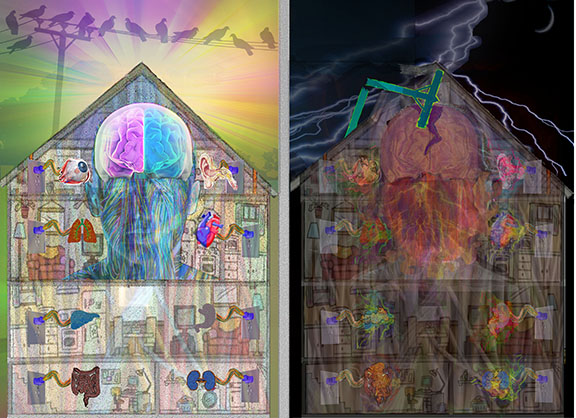 This image I created represents a vision I had while doing a phone healing on a client who had a severe concussion a number of years ago, caused by a branch of a tree falling on his head during a lightning storm.

Although by his own account, he was functioning reasonably well in his job as a high school English teacher and school theater director, he became somber as he recalled how his acting career, which had been on the verge of major breakthroughs, fell apart when this head injury occurred. The injury virtually extinguished the special instinctual abilities he had had for in-the-moment situational acting, as well as the ‘unique sparkle’ that had carried him so far in the acting world up until that point.

When I tuned in for the healing, his body wisdom showed me a metaphorical vision of his body as a completely darkened house with all the electrical circuits blown, and all his internal organs connected to burnt-out electrical outlets. His ‘house brain’ seemed eerily quiet, with not a lot of mental activity going on. Certainly functioning every day as a high school teacher and theater director would require plenty of intelligent brain activity, but this activity did not seem to be particularly ‘inspired’ or ‘lit up’ with imagination and passion. Indeed, judging from telepathically witnessing the brain activity of other clients, his brain activity seemed relatively dull and sluggish.

At this point in the healing, I experienced the complete full-body trauma of the tree branch crashing onto to my client’s head as it was telepathically transferred to my aura. This ‘trauma transfer’ was extremely intense, causing my whole body to shake, vibrate and convulse wildly. The convulsing I experienced corresponded to the massive electrical fires burning in his nervous system from this short-lived but extremely severe head impact. It took only a few seconds to create a huge energetic synapse-fire in the brain which spread quickly through the energy nerve-wires running through his entire body, short circuiting all his internal organ-systems. Although his body wisdom didn’t focus my attention on what happened to his chakra system during this impact, it’s easy to imagine that all his chakras (root, belly, solar plexus, heart, throat, third eye, and crown) were short circuited as well.

A complete nervous system blackout in just a matter of seconds! The thought of this terrible ‘freak accident’ happening to my client still kind of blows my mind.

Luckily the human body has redundancy built into the nervous system, such that my client was, over time, able to regain some measure of his previous electrical brain-body aliveness, but never to the level of his spontaneous, intuitive and passionate neural awake-ness that he had during his acting days.

Amazingly, after peeling away and removing the layers of this devastating head trauma, I saw the consciousness of his internal organs begin to transform from a more or less dormant state to gradually waking up – as if from a long, deep sleep, like Rip Van Winkle. I now saw bright, multi-colored energetic wiring throughout his brain and nervous system, giving me hope that his life from this point forward would be filled with imagination, vitality, spontaneity, and confidence – those very qualities which elevated a promising acting career in years past.