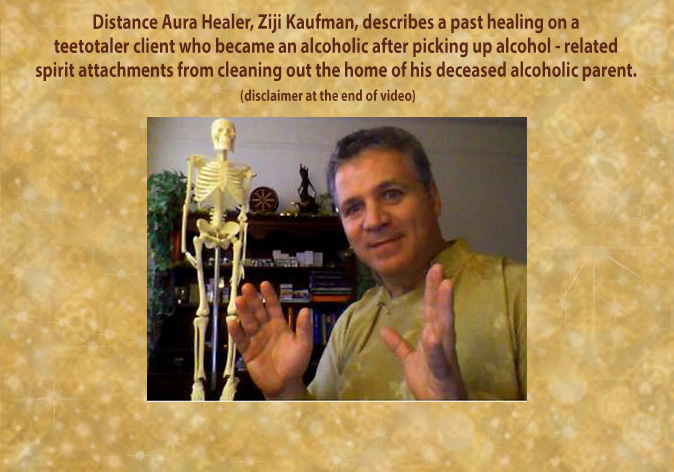 Distance Aura Healer, Ziji Kaufman, describes a past healing on a teetotaler client who became an alcoholic after picking up alcohol - related spirit attachments from cleaning out the home of his deceased alcoholic parent.

This video describes a Remote Aura Healing on a client in his 40s, who finds out that his father had passed away.

He hadn't seen his father and/or been in his house for many years.

He had a falling out with his father a long time ago.

So my client had to clean out his deceased father's house, and he really didn’t have a lot of energy to go to another state to deal with this huge task.

It was an enormous strain on my client's physical health, as well as taking a toll on his emotional health.

One distasteful dimension of cleaning his father’s house, was that his father had been an alcoholic.

This was one of the reasons my client didn't speak to him for such a long time.

So many of the emotional and mental health problems that my client had likely came from his father’s alcohol abuse growing up.

My client was dead-set against drinking alcohol, never wanting to be like his father. He firmly committed to never verbally, psychologically, and physically abusing his children, and especially committed to avoiding all substance abuse which led to his father’s child abuse tendencies.

So my client had to spend a lot of time in his deceased father's house going through everything, sorting, organizing, saving, labeling, and discarding things.

Thus without any comprehension of the phenomenon of evil spirits attaching themselves to our energy bodies, my client began to gradually absorb the alcohol spirits that had permeated his father’s house for all those years.

Tragically, within a few days of cleaning out his father's house, and having to handle and smell all the many open bottles of alcohol his father had left lying around, my client started drinking!

And in the coming year, my client became an alcoholic himself, which lasted over a decade until he finally started to attend AA - Alcoholics Anonymous meetings, followed the 12 steps as best he could and got himself sober. He also attended Adult Children of Alcoholics meetings.

Now even though my client came to me many years after becoming sober, he still had a lot of emotional issues.

He really wasn't connecting to people, wasn't moving ahead in his business, and had a lot of depression.

He also had a lot of weird facial and body mannerisms which typically acted to push others away, leaving him feeling very isolated and alone.

Now I've seen a lot of wild and mind-blowing things in my many years of doing Distance Aura Healings, but what I saw in my client’s aura was truly unbelievable!

You know, they call alcohol ‘Spirits’ for a reason. They're spirits. They take you over.

In this case, these 14 alcohol spirits had ‘taken over’ my client’s 6th auric layer of the 7 layers of the aura, which I call the ‘Spirit Body Layer- the Lower Astral ’.

These spirits had ‘camped out’, squatting rent-free, taking over my client's 6th layer of the 7 aura layers completely.

They were having a great party at the expense of my client.

And all my client's weird facial and body mannerisms, all the depression, all the anti-social dimensions, the tiredness, failures, etc., came from this raucous, irreverent, crazy, alcoholic party that these 14 spirits were having all the way up in his 6th layer auric ‘tree house’.

It was just unbelievable! And they were weird, really, really weird spirits.

So, basically, the distance healing was just about me being guided to ‘evict’ these alcohol spirits.

It was pretty dramatic. Some of them were pretty strong, putting up a good struggle to avoid being evicted from their illegally gotten ‘home’.

I should mention the importance of the 5th Layer of the 7 layers of the human Aura (which I call the Blueprint / Template / Human Container Layer) in protecting us from disincarnate spirit beings entering into and potentially possessing us. From my vantage point, it’s the holes and leaks in the 5th subtle body layer into which spirit entities gain access to our ‘Human Container’ which protects our energy body. It is the physical and emotional traumas we’ve experienced in this and past lives that create these holes and leaks in he fifth layer of the Aura.

In this case, my client’s 5th layer was strong enough such that the 14 alcoholic spirit entities weren’t able to gain complete access to his 5h layer ‘Human Container’, hovering and making a lot of ‘noise’ just above it on the 6th subtle body layer.

In the metaphysical literature, they might refer to this paranormal activity as spirit possession.

But as I’ve just described, I would make a distinction between spirit entities penetrating the 5th layer, and those that have been held at bay on the 6th layer by the protections of the person’s auric 5th subtle body layer.

I should also mention the role of the Chakras and the protective filters in each of the 12 Chakras on the 5th layer of the aura. These filters clearly held up in my client’s case, but if my client’s 5th Chakra (of the 7 primary chakras) filters had been breached, these spirit entities could have done a lot more damage by penetrating his 5th layer ‘Container’. Fortunately, no intricate Chakra Healing was necessary in this healing.

So I was guided to evict these alcohol spirit entities back to the universe, with them possibly taking detours to some neighborhood bar to find another victim who is drinking and who will unknowingly allow these raucous spirits to come into their body.

Thankfully, ever since I pulled the alcohol spirits out of my client’s aura, there’s been pretty amazing shifts in my client’s physical and emotional health.

My client previously had bags under his eyes and just had this ‘from the dark shadow’ look about him. Now my client's face is really clear and is looking really good.

So, this is an example of the power of alcoholic spirits and what they can do to you.

I mean the body maintains a beautiful 98.6 degrees of heat creating a nice warm ‘house’ for spirits to live in.

So if spirits can somehow penetrate the aura’s protective barriers and get inside the 5th layer ‘Human Container’, they can be very difficult to unearth much less evict. Once inside the 5th layer, spirit entities are very adept at hiding, burrowing deep inside interior auric layers.

And until a remote healer like myself or some other metaphysical practitioner is sought out who can perceive spirit entities and evict them, the person's immune system will work non-stop to ‘quarantine’ the spirit entities, mobilizing white blood cells and other body defense systems to hopefully contain them and minimize their daily impact on the person’s life. This ‘quarantining’ takes an enormous amount of energy, and must be maintained permanently until relief from some ‘entity evictor’ is sought out. Someone like myself.

Luckily, my client sought me out, and I was able to evict these crazy alcohol spirit entities from his aura and hopefully, he will continue to feel good and share his positivity with others.