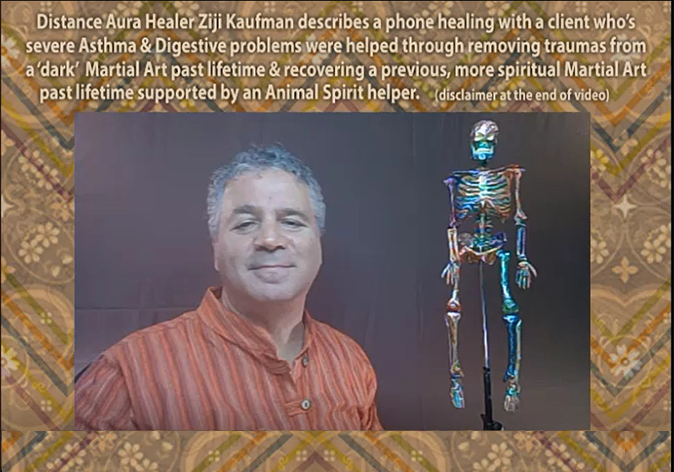 In this video, Remote Aura Healer Ziji Kaufman describes a distance aura healing he did on a client who had severe Asthma and Digestive problems from childhood. After tuning into the client's aura, I saw that the client's physical problems seemed to stem from a past life as a Martial Artist serving organized crime. His Asthma and Digestive problems, at least on the Auric level, seemed to lessen considerably once the past life traumas had been lifted from his Aura. There are many interesting dimensions to this healing, including ancient Martial Art spirits, spirit animal helpers, and a discussion of the Buddhist Shaolin Monks and their approach to Martial Arts. What follows is a more detailed analysis of this video:

As mentioned above, this client came to me with very severe asthma and digestive issues. He was very sickly as a child being in and out of hospitals throughout his childhood.

When I tuned into him for a distance aura healing, I very quickly communicated with his auric field's inner intelligence which revealed that he had a past lifetime as a Martial Artist. The very first Martial Art past lifetime revealed was one where he seemed to be involved as some muscle enforcer for an organized crime enterprise. As the healing progressed, I was guided to dissolve /  erase / excavate / remove /etc. those events in this criminal past lifetime where he was involved in various violent altercations, intimidations, bullying, etc.  There were 6 major incidents that I was guided to 'pull out' of his aura, and each time one of these traumatic events was 'erased', his auric lungs seemed to open up a little bit more. After pulling out these 6 traumatic events his auric lungs seemed to be nicely expanded and he seemed to be breathing more effortlessly, which, at least at the auric level, pointed to some relief in THIS lifetime of his Asthma condition. The Digestive System of course is going to be negatively affected by repeated aggressive altercations. The stomach tightens, the fight or flight hormones go ballistic, etc. So, again, by removing these 6 major Martial Art altercations, at least at the auric level, my client's digestive issues in THIS lifetime, will have some relief.

I'm calling each of my client's past lifetime Martial Art altercations to be HIS TRAUMA. But to be fair, it was obviously the recipient of my client's Martial Art aggressive actions that received the biggest trauma. Nonetheless, my clients' auric field as well as his auric lungs, heart, digestive system,  his spiritual soul, and many other dimensions of his being,  'DIED'  in cumulative ways after each aggressive altercation he was a part of. In this sense, his own participation in these aggressive acts created a trauma for every part of his being.

After pulling out these 6 'traumatic' incidents from his aura, we seemed to now be at an earlier time in this past life where he wasn't yet a 'hardened' Martial Artist. He still had some innocence in his heart and his lungs, both of which hadn't yet hardened or constricted. Also, his digestive system hadn't been flooded with tension and stress hormones yet.

What is interesting in this case, is that my client wasn't a Martial Artist in this current lifetime.
When first beginning a remote aura healing with a client, and the client is sharing their physical or emotional issues with me, I always ask a lot of questions to try to find out what might be the cause of the issue. I will ask such questions as "do you know what was happening in your life right before this particular physical or emotional issue first began"?  If the person can't think of some kind of concrete life event or long-term situation that occurred a reasonable timeframe before a particular condition manifested, and the physical/emotional condition has been with them since childhood, and possibly from birth,  then I will often hypothesize that their condition came from a past lifetime and that they came into this lifetime with it already in their aura.

Another interesting dimension of this healing was what was occurring on the spirit plane. At a certain point, I started recognizing that my client had spirits, extremely angry spirits to be accurate, in his lungs. I had a sense that these spirits might be martial arts spirits from my client's past lives. The fact that they were angry spirits, probably points to my client's martial arts lifetimes being the 'hit man' for organized criminals. Nonetheless, my client's body wisdom was clearly ready to get rid of these spirits from his lungs, and with each spirit that I pulled out, the energy in his lungs seemed to lighten and his breathing seemed to become easier. These
spirits were hanging out on the 6th (lower astral plane) layer of the 7 layers of the human aura.

This martial art spirit dimension brought to mind one of Jean Claude Van Damme's movies where he went to the ancient burial grounds of great martial art fighters to train for his upcoming kickboxing fights. I might be interpreting all of this incorrectly, but I imagine that one of the purposes of training in essentially a cemetery of great ancient masters of the martial arts, was to potentially communicate with these spirits and (politely and with great reverence and perhaps a fair amount of fear and trepidation) invite them to help them train, teaching them their techniques and secrets, even perhaps inviting them to enter into there bodies (spirit possession) and 'take over' while they are training and eventually fighting someone else. Again, these ancient Martial Art spirits would be hovering on the sixth layer of the seven layers of the aura, what I call the lower astral plane of the human aura.

Of course, inviting these master martial arts spirits to help you to train and fight in these ways, would more than likely end up hurting your auric light, particularly darkening your heart chakra, and seriously dampening your ability to love another as well as yourself.

The chakras too will, of course, be damaged if not potentially extinguished due to martial art fighting, particularly if there are evil and sadistic intentions in the fighters.
The heart chakra, the 4th of the 7 main chakras, as mentioned above, will be the hardest hit, unless as mentioned, the fighter is highly evolved spiritually and has learned to not fight with anger and any intention to hurt another person. But this is extremely rare, of course. Most fighters will have some anger in their punches and kicks, and varying degrees of retaliation violence, particularly if they are humiliated in an exchange.

The 1st chakra of the 7 primary chakras, the root chakra (also referred to as the 1st Chakra, or the Muladhara Chakra),   can be easily damaged and diminished in energy and light if the fighter 'losses their feet' in an exchange, and/or any sense of defeat will most likely permanently hurt their spirit body's connection to ground. Any separation of the spirit body from its connection to ground can have multitudinous health implications, as (reflexology teaches us) essentially the whole body is connected to the feet and relies on the energies from the earth for a major source of energy and life force.

The Belly Chakra (also called the Sacral Chakra, the 2nd Chakra, or the Svadhishthana Chakra) is, among other qualities, connected to pleasure (as in having a 'belly laugh). So from my experience, a person involved in the martial arts, typically will have a highly traumatized belly chakra, since in the course of sustaining and/or inflicting punishment, their pleasure centers get severely darkened. Repeated 2nd chakra trauma may change a person's core personality from relatively good-natured to mean-spirited and potentially much worse!

The Solar Plexus Chakra (also called the 3rd Chakra or the Manipura Chakra) in my current experience is, among other qualities, about our connection to people. Typically a martial arts fighter will develop certain blocks and knots in this chakra which will tighten and close off when encountering a person that feels like a physical threat.

We've already mentioned the Heart Chakra (also called the 4th Chakra, or the Anahata Chakra. Obviously inflicting pain on another in the throes of anger or similar emotion, will cause the heart chakra to darken or even shut down.

The Throat Chakra (also called the 5th Chakra, or the Vishuddha Chakra, may not have as direct a traumatic effect from martial arts fighting as the previous 4 chakras mentioned above. Nonetheless, many times fighters resort to violence because they have given up and/or lost the ability to avoid fights through verbal de-escalation, etc. The 'strong and silent type' may be all bottled up emotionally and have thin skin, ready to launch into physicality with any real or perceived provocation.

The Third Eye Chakra (also called the 6th Chakra, or the Ajna Chakra, is involved with, among other qualities, creativity of thought. Typically, in my experience, a martial arts fighter who may have an active Third Eye Chakra at the beginning of their career which translated into creative and winning martial art maneuvers, eventually, after enough blows to the head, for example, begin to become more 'dim witted' and 'pig headed' in their fighting style. Obviously, this will vary greatly between different fighters.

Finally, the Crown Chakra (also called the 7th Chakra, or the Sahasrara Chakra, will typically cut off a martial arts fighter from their connection to spirit, except in the most advanced and spiritually evolved fighters.

I should give a huge shout-out to all those Martial Art Sensei's (Teachers) who emphasize meditation, self-control, and advocate the use of violence as an absolute last resort. As mentioned in this video, the highest spiritual path of a Martial Artist would be to emulate the Shaolin Monks. This video goes into the world of the Shaolin Monks to some greater extent, emphasizing their Buddhist mediation and spiritual practices which inform their Martial Art training.